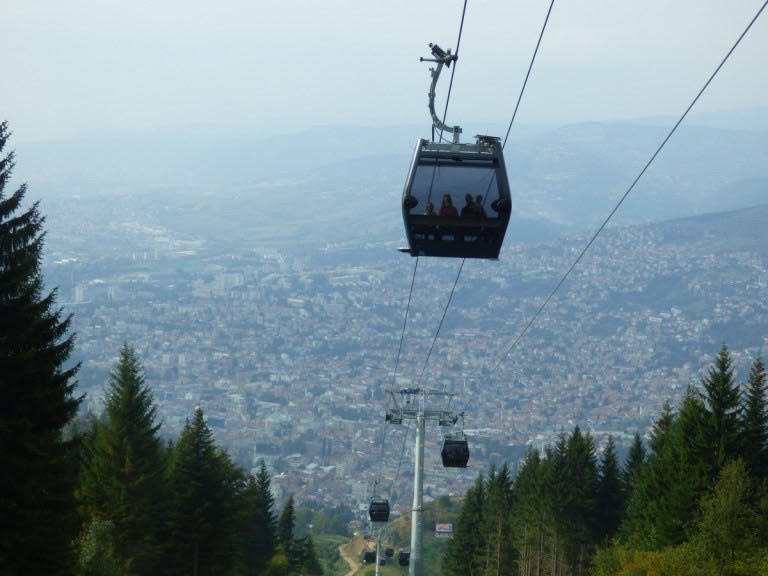 Sarajevo Cable Car isn’t just any old cable car that goes up to the top of a mountain. It is a sign of history, a symbol of endurance.

The original cable car, formerly called the ‘Funicular’, opened in 1959 and was one of the most popular tourist attractions in the country. The car traveled to the Trebevic Mountain. Of course, the 1990’s war caused much devastation to the entire city, and the cable car was destroyed.

The cable car wasn’t much of a priority, with restoring infrastructure and other important buildings coming first. Finally, after 26 years of waiting, the cable car reopened at the start of 2018. Now, it consists of 33 gondolas, each holding up to 10 passengers, and traveling to the top of the mountain.

Every single hour, the cable car has the capacity to transport around 1,200 visitors.The summit station, called the Vidikovac Station, is home to a relaxing cafe offering stunning panoramic views.

During our free tour you will get more informations, how to take cable car, prices, timetables etc.

What else to see on Trebevic mountain?

The Sarajevo Olympic Bobsleigh and Luge Track used for the ’84 Olympics. After the Winter Olympics, the track was used for World Cup competitions until the start of the war in 1992.

The track was damaged as a result of the siege. During the siege, the track was used as an artillery position by Bosnian Serb army. Today, the tracks still remain mostly intact with war wounds.

The abandoned, war-torn track is now a destination for urban explorers. Nature is slowly growing over the area and the remnants of the course is now covered in graffiti.